Liver fibrosis and cirrhosis are the result of chronic liver injury. Working out the cause requires careful evaluation of the clinical context including history, laboratory values, and imaging results. Liver biopsy still stands today at the foundation of clinical hepatology. However, in straightforward cases today, it is being replaced by non-invasive methods.

The state of liver health can be assessed non-invasively by:

Liver biopsy is the "imperfect" gold standard for both diagnosis of liver disease and the staging of liver fibrosis. Its strength lies in its long and established history and the diversity of findings in one test. Without it, things are not always as they seem. The obese, diabetic patient with abnormal liver enzymes may have autoimmune hepatitis (AIH) or both AIH and steatohepatitis; the treated AIH patient with abnormal liver enzymes may have inadequately treated AIH or, with steroid induced weight gain, may have transitioned to fatty-liver disease. Other unexpected histological findings may include granulomatous inflammation, bile duct injury, venous congestion. It is unsurpassed in reliably establishing tissue metal content in suspected hemochromatosis or Wilson’s disease. Nevertheless, it is an invasive procedure with risks of non-trivial complications including pain and transient hypotension, to major complications, including hemorrhage,  puncture or inadvertant biopsy of viscus (gallbladder, colon, pleura, kidney, pancreas), intrahepatic arteriovenous fistula formation and bile peritonitis. Also, considering that a biopsy sample is just 1/50,000 of the entire liver, it is subject to sampling error and interpretation variability. For example a 25mm percutaneous liver biopsy misclassifies fibrosis stage 25% of the time, in comparison to a large surgical biosy (>50mm length).

The stiffness of your liver can be measured with transient (VCTE), shearwave (SWE) or magnetic resonance elastography (MRE): Unidimensional vibration controlled transient elastography (VCTE) is a 10 minute, non-invasive, painless procedure experienced much like a liver ultrasound.  The patented Fibroscan® equipment (Echosens, Paris) consists of a 5 MHz ultrasound transducer probe mounted on the axis of a vibrator. Mild amplitude and low frequency vibrations (50 Hz) are transmitted to the liver tissue, inducing an elastic shear wave that propagates through the underlying liver tissue. The velocity of the wave is directly related to tissue stiffness. The technique measures the stiffness in a cylindrical volume 1 cm in diameter and 4 cm in length, amounting to about 1/500 of the entire liver volume - 100 times larger than the volume of the liver biopsy specimen. Fibroscan was the first commercially avilable elastrography method and to date, it is the technique with the most advanced quality criteria and evidence.

Some radiology practices report liver stiffness measurements (LSM) with shear wave elastography which uses standard ultrasound equipment, and a similar algorithm to the Fibroscan. Others use MR elastography or the patented Fibroscan®. As they quantify tissue elasticity over a relatively large area of the liver, they may not suffer from the sampling or interpretation variability of liver biopsy. While all these techniques show comparable results for accurate diagnosis of fibrosis at the end of the extremes of the spectrum such as no fibrosis, very mild or advanced fibrosis (F>1 84-87%, F>2 88-89%, cirrhosis 93-96%), the intermediate ranges are less reliable. Also elastography is better at excluding rather than confirming liver cirrhosis. Future research is needed to further validate non-invasive imaging other than Fibroscan particularly in the presence of those things that lead to overestimation of liver fibrosis including obesity (BMI>30) and diabetes along with necroinflammatory activity, ALT hepatitis flare, cardiac failure, cholestasis, excessive alcohol intake and not fasting for at least 2 hours prior.

Several scores are use to characterise the stage of liver disease. APRI, FIB-4 along with the lesser used extracellular matrix marker scores ELF (combining three fibrosis markers TIMP-1, PIIINP, and HA to a single value) and FibroTest (combining α2-macroglobulin, haptoglobin, apolipoprotein A1, bilirubin, GGT) are used in combination with elastography to improve diagnostic accuracy of fibrosis stage F > 1.

Fat in the liver is measured quantitatively with the Fibroscan using the Controlled Attenuation Parameter (CAP). You and your doctor can use this score to grade your steatosis (fatty change). Fatty change is when fat builds up in your liver cells. Your fat level should be in the green zone. If is above this, you and your liver might need extra attention. The CAP score is measured in decibels per meter (dB/m) and it ranges from 100 to 400 dB/m. The table below shows general ranges of Liver fat (CAP) scores and the matching steatosis (S) grade which suggests the amount of fatty change in the liver. 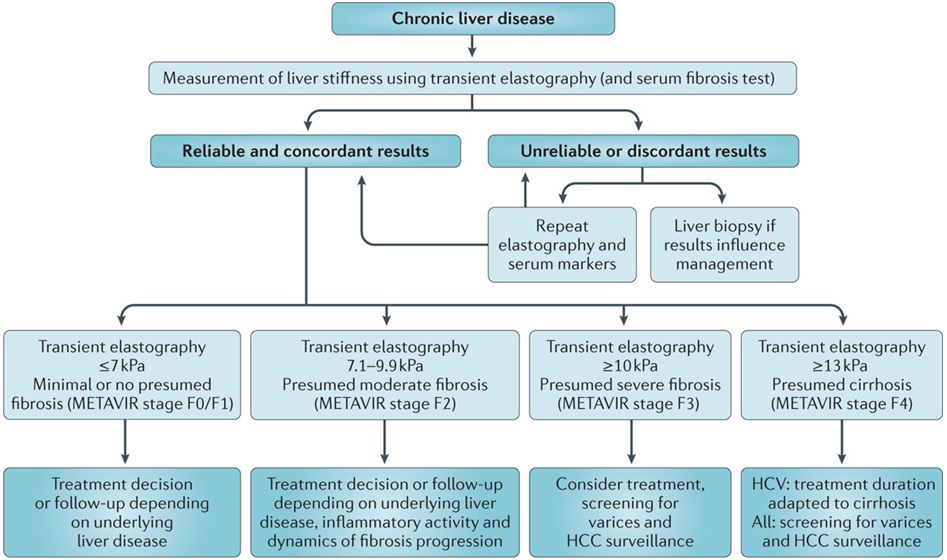 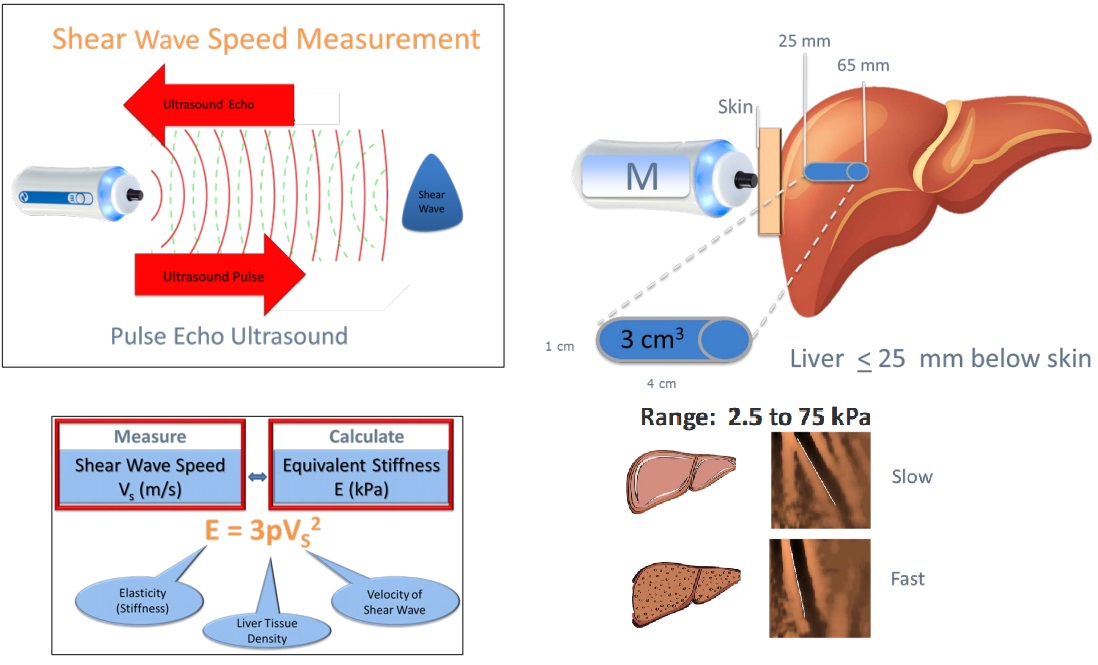 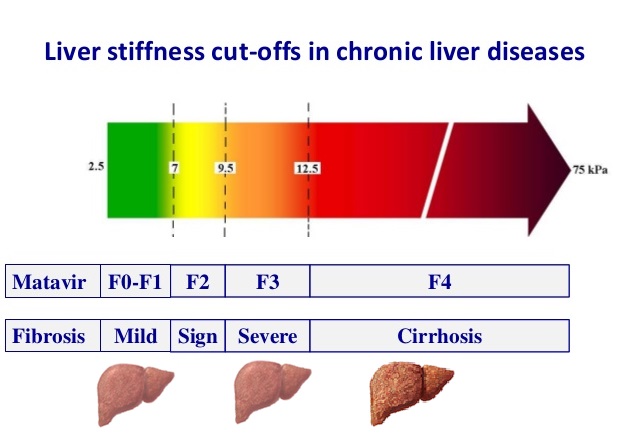