What is bowel cancer?

The most common cancer in Australia (after skin cancer)

This cancer develops silently over years from uncontrolled, wart-like growths on the inner surface of the large bowel called polyps

90 per cent of bowel cancers can be treated successfully, if detected early

Who is at increase risk of getting bowel cancer?

Bowel cancer risk is higher for people who have:

Do I need bowel cancer screening if I have no symptoms and no family history? YES 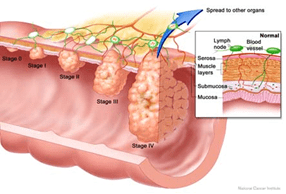 What screening options do I have after I turn 50? – there is no perfect option

Is bowel screening for me?

... then you are at significant risk for bowel cancer.

"Deaths from bowel cancer have not fallen much since the 1960s.